Falling Back In Love With Cape Town On The CitySightseeing Bus

Coming home is always a really amazing experience. The magic of seeing the mountain, taking a dip in the ocean, and breathing in the fresh air of Cape Town is so refreshing, but as locals, after about two weeks in the city, the excitement and idea of being home, and seeing friends and family wears off. Don’t get me wrong, we love Cape Town, but as long-term travellers, we are always looking for something new and different from what we know.

With a few major events planned for our current trip to Cape Town, we committed to spending six months in the city. And over the last four month, as locals, we’d become almost immune to the city’s beauty and vibe, and started taking for granted what we had access to – world class beaches, amazing hikes, and delicious food. This made me sad, and I knew that I needed to fall back in love with my hometown.

We recently celebrated a few personal milestones, and decided to do something that both of us hadn’t done before in Cape Town – taking a trip on the CitySightseeing Bus. As Capetonians we love being tourists in our own city, and this was the perfect excuse to do so. 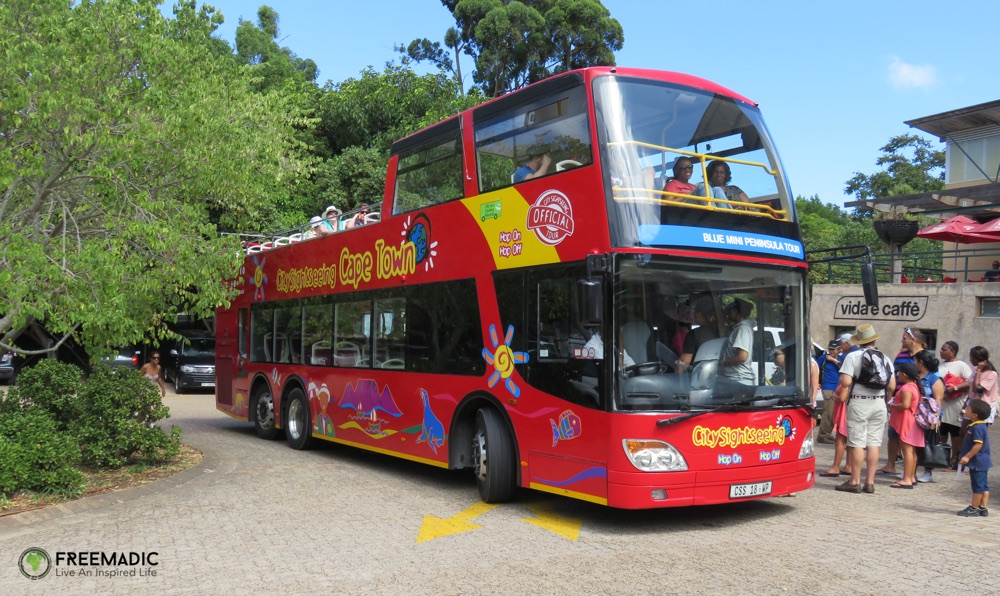 Like every other tourist that visits Cape Town in summer, we got up super early and headed to Kirstenbosch Botanical Gardens where we boarded the CitySightseeing Bus, and joined their Blue Route tour.

Tip: Coming for the Southern Suburbs of Cape Town, we decided to avoid the chaos of the V&A Waterfront and rather board the bus on route. Not only does Kirstenbosch have free, secure parking, but you can purchase your tickets online or directly on the bus. 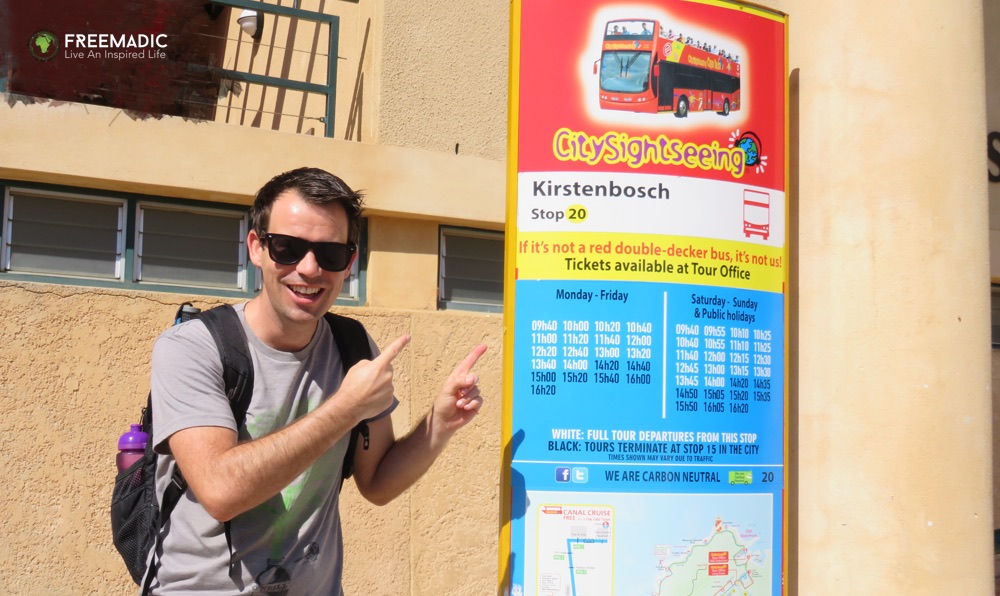 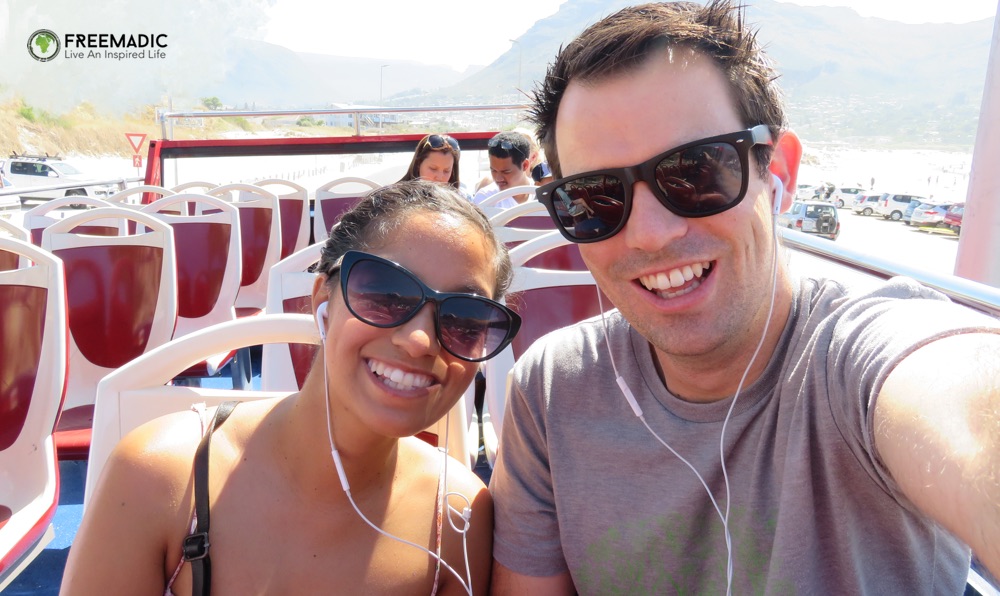 Boarding the bus was quick and easy, and we settled on the upper deck which has the better views. As we headed through the suburbs of leafy Constantia and Hout Bay, on a road that is almost carved into the forest, I could slowly feel myself being reintroduced to the magic of Cape Town – it must have been something about the fresh air, and almost being able to touch the treetops. 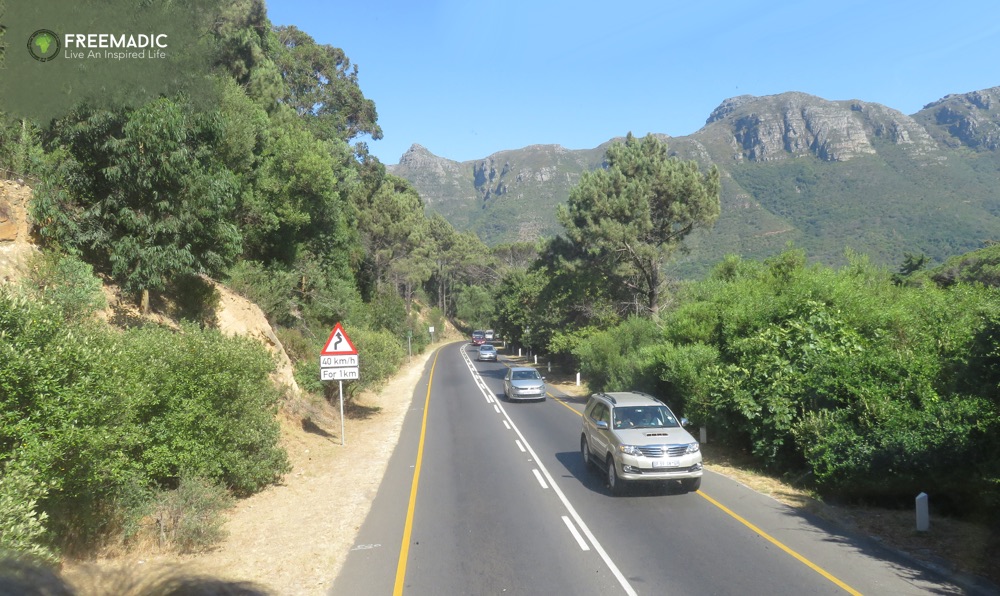 As we passed the township of Hout Bay and headed towards the beach, the commentary became more and more interesting and I started to learn new things about my city. 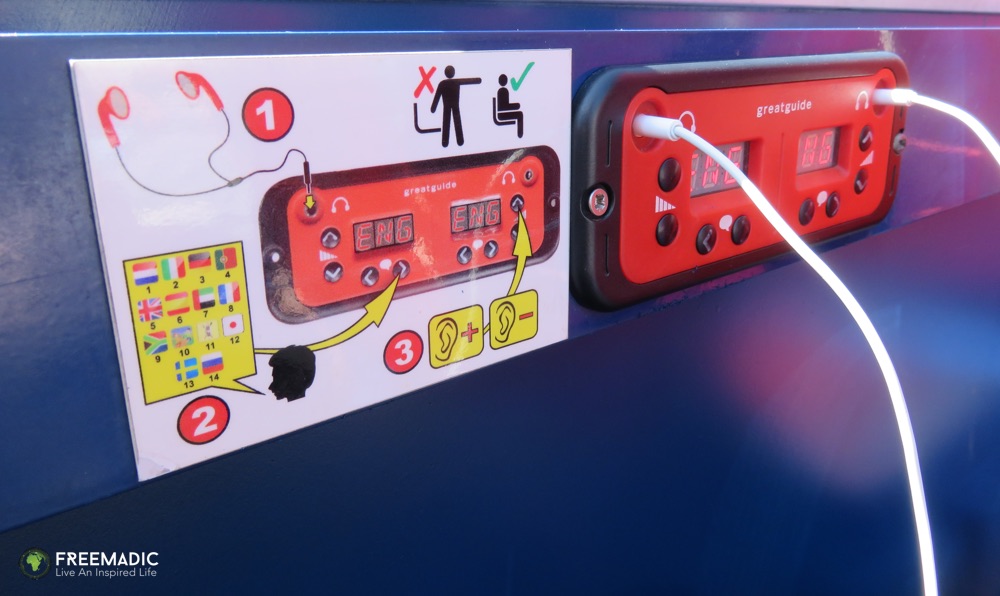 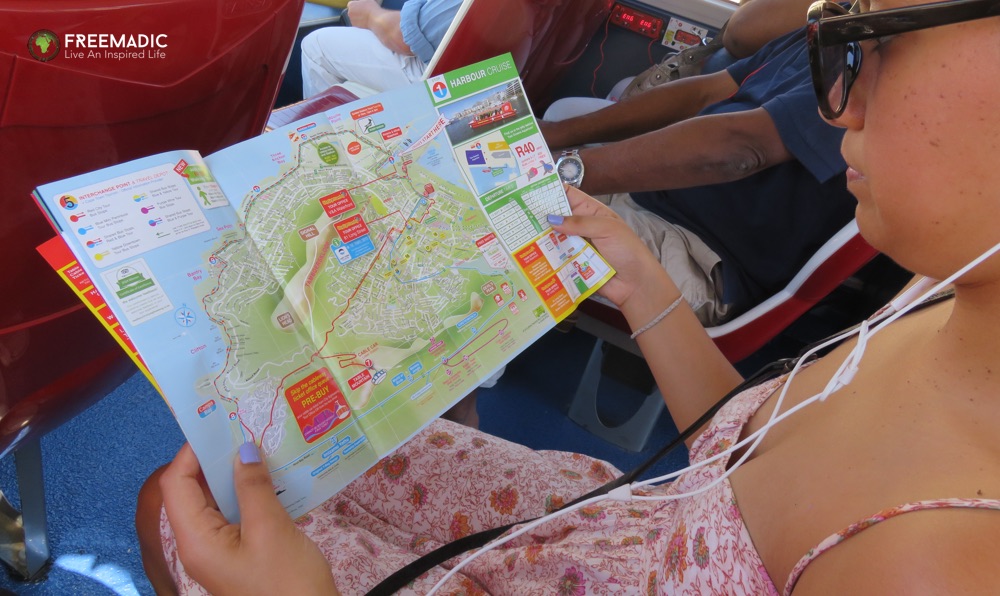 Heading over towards the Atlantic Seaboard, we were immediately hit by a cool sea breeze. As locals, we found the commentary a little redundant and extremely boring, so we pulled out our headphones and just enjoyed the views. With not a cloud in the sky and surprisingly no wind, The Mother City was making a conscious effort to impress us. How can anyone not fall in love with this city after seeing the mountains tower out of the ocean complemented by the pristine white sandy beaches? I surely felt like I was the luckiest girl in the world to call this city my home. 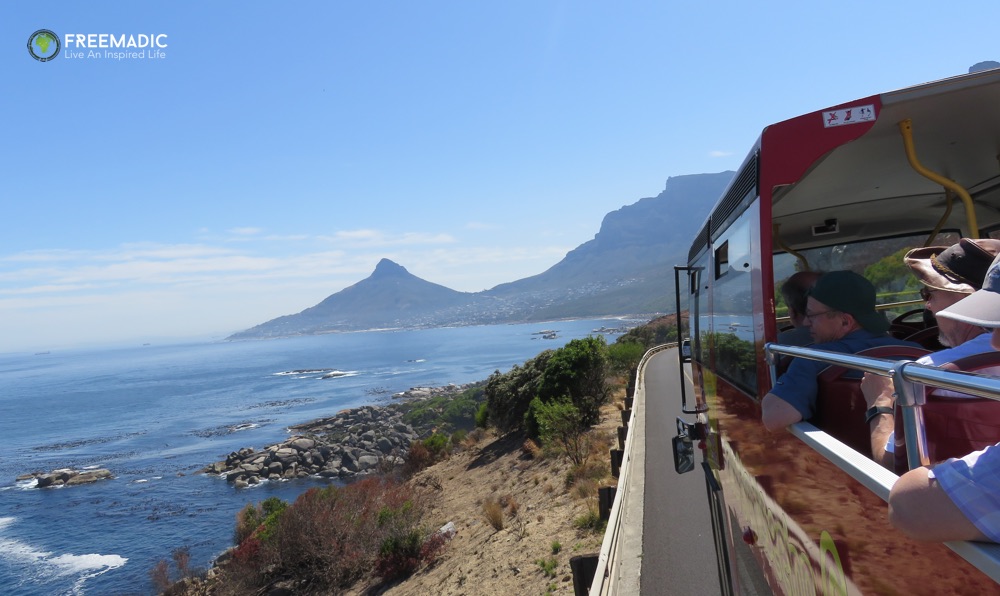 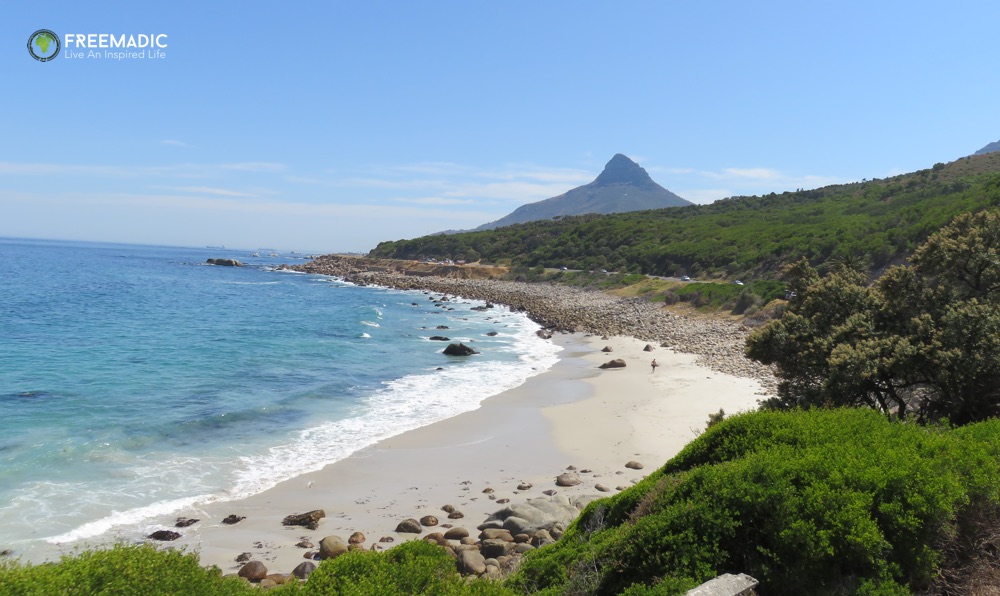 We then headed along Beach Road towards the Green Point Lighthouse (sadly no mention of the fog horn which is located close by) and Cape Town Stadium, before heading to the V&A Waterfront. This was our first stop where we decided to hop on the CitySightseeing Harbour Cruise. 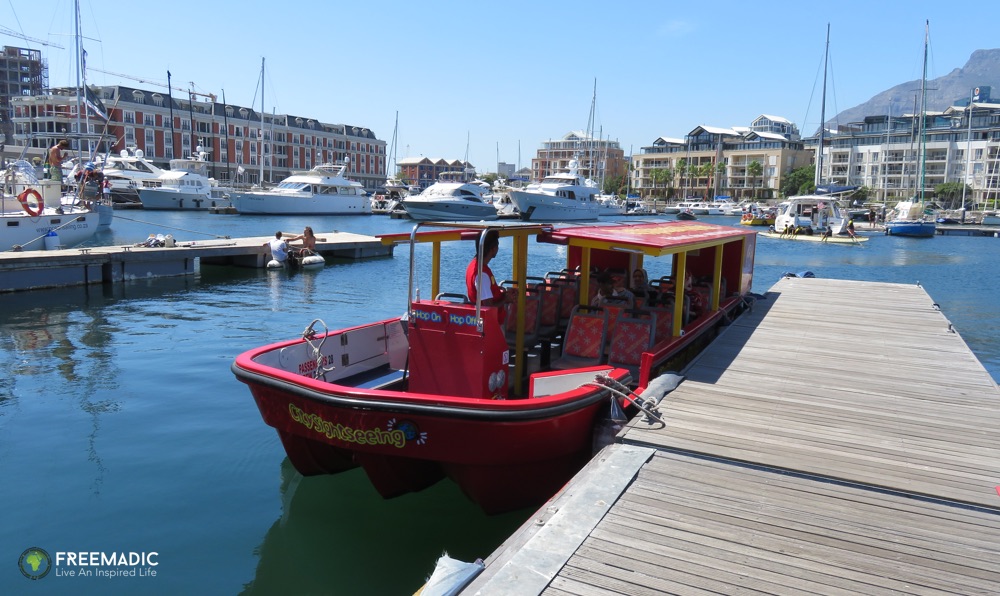 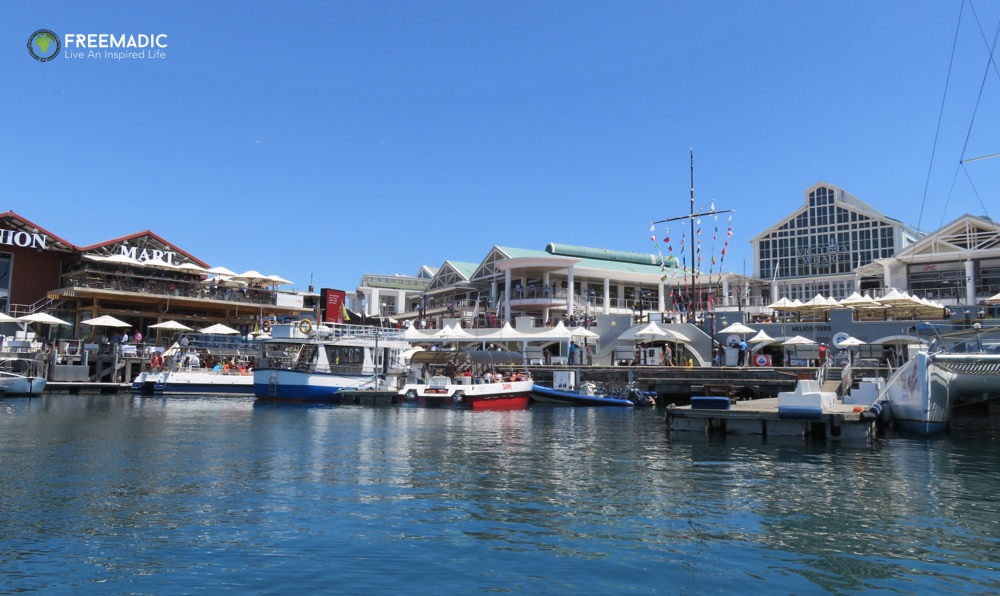 With our two day pass, this cruise was free and an absolute pleasure. Taking us around the small harbour where we continued to learn about Cape Town, the V&A Waterfront and harbour itself. My favourite part was seeing the adorable seals floating on the water’s surface who were warming themselves by holding their flippers in the air. 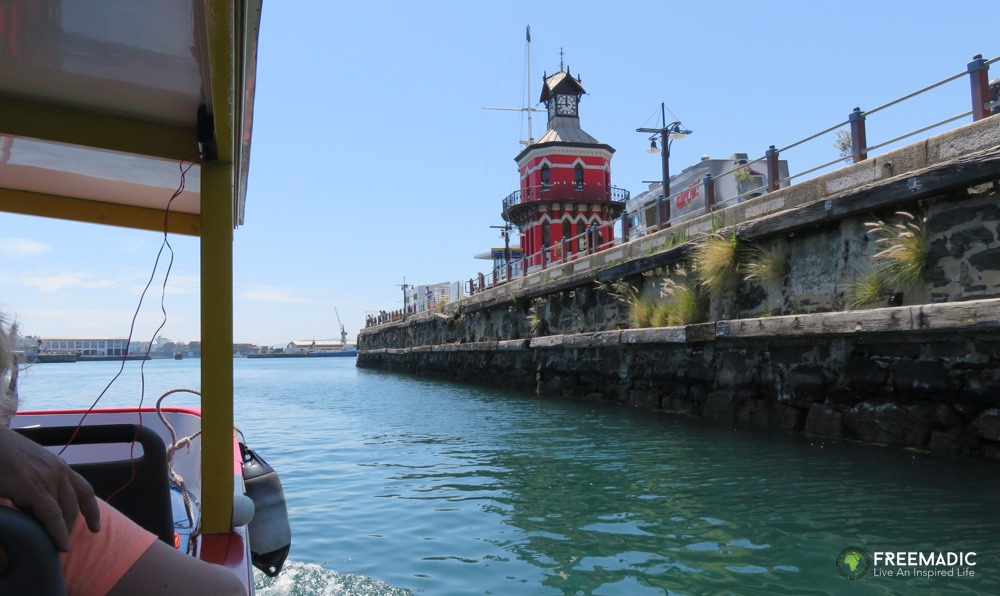 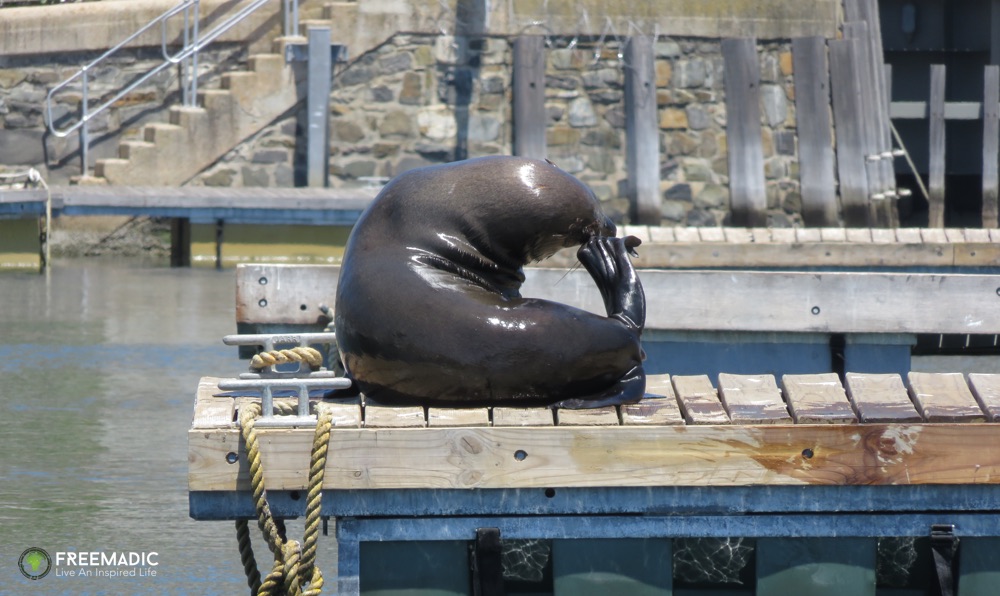 After lunch, we decided to take a loop on the Red Route tour which took us through the city, up to the Table Mountain Cableway and back along the Atlantic Seaboard to the V&A Waterfront. The one thing that all Capetonians know and do, is to avoid any and every tourist attraction during peak season in Cape Town. We do this to avoid the traffic and long queues, but being on the bus, I was forced to head up to the cableway. For me, not driving, it was an opportunity to take in the views from Table Mountain of the city below, and absolutely have my mind blown by Cape Town’s beauty.

Tip: If you don’t have a ticket to the Table Mountain Cableway, they are available on this bus. We strongly advise that you pre-purchase your ticket online or on the bus to avoid the crazy queues.

Exhausted and ready to head home, we changed buses again to get back on to the Blue Route, and headed back to Kirstenbosch Gardens. 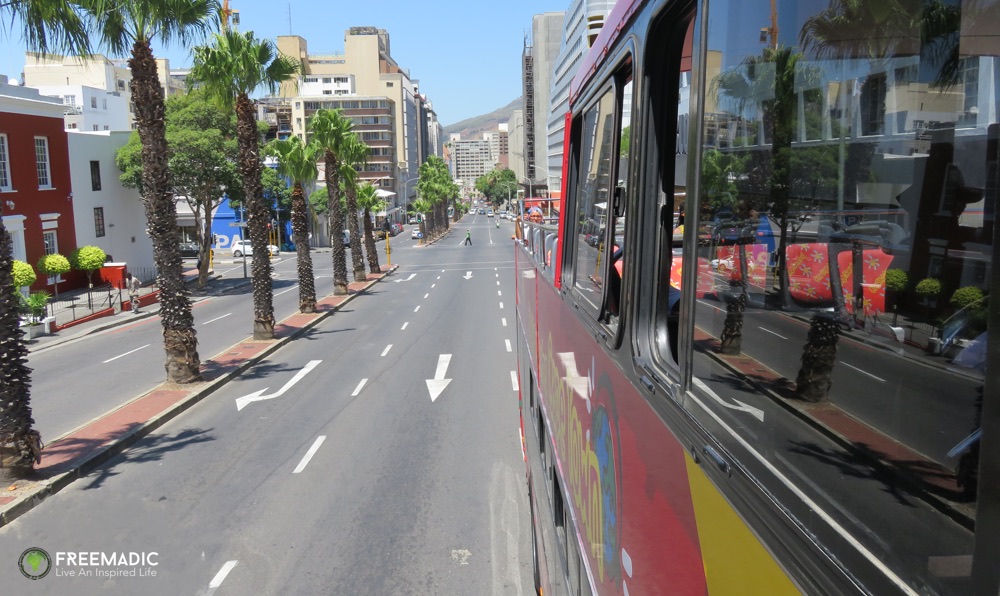 Looking back on my day on the CitySightseeing Bus, I fell back in love with my hometown. Having travelled so much over the last two years has made me come home, and not really appreciate what I have, where I’ve grown up, and the people that make this place so special. But being a tourist in my own city, and taking the time to explore made me love my hometown even more.