One of the most breathtaking moments during our entire seven month stay in Southeast Asia was experiencing the Mae Jo Sky Lantern Release. Once a year both tourists and locals head to the small town of Mae Jo about 30 minute scooter drive outside of Chiang Mai, to attend the graduation ceremony of an independent Buddhist group called the Duangtawan Santiparp Foundation.

Arriving early around 3pm, we quickly found a shady spot on the grass amongst the thousand of people that had already arrived. With delicious food on sale, we spent the afternoon chatting, eating, and learning about different Buddhist practices and traditions. As night falls the ceremony begins with the graduates and their families presenting themselves as other monks give them their blessings.

The night ends with an orchestrated mass sky lantern release that is absolutely beautiful and something that we will never forget. Carrying people’s wishes and hopes, the sky lit up with thousands of lanterns in a spectacular eyeful. This unforgettable moment is definitely something to add to your Thailand bucket list.

Commonly confused as being part of the annual Yi Peng Festival (also known as Loi Krathong Festival), this mass sky lantern release is an independent event not organised by Tourism Authority of Thailand (TAT) or the Chiang Mai Municipal Authority.
Even though entrance is free, guests need to dress respectfully and may not bring their own lanterns, but instead purchase them from the stalls at the event for 100 Baht each. 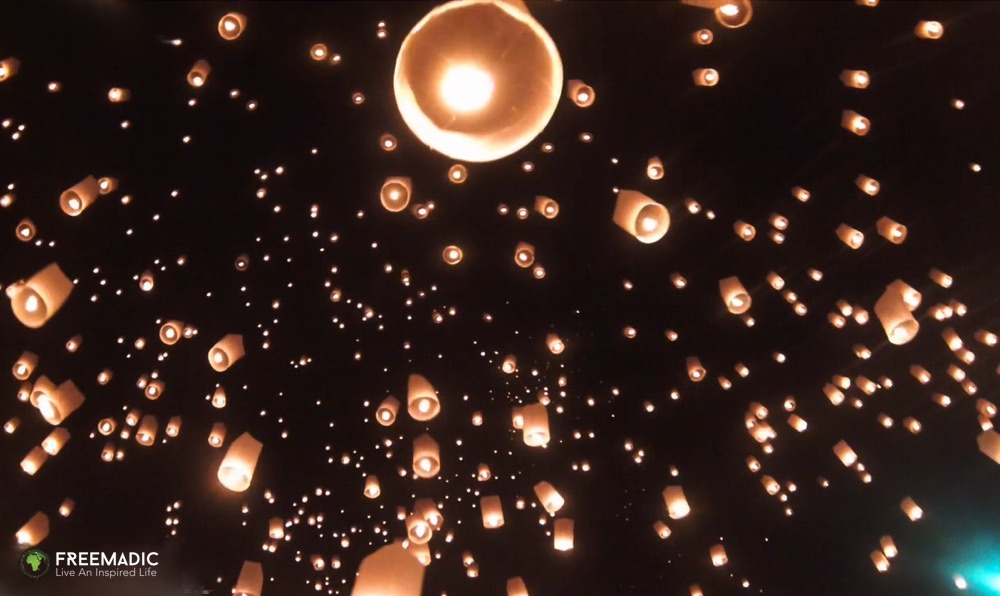 If you have any questions about visiting Chiang Mai or the Mae Jo Sky Lantern Release, please ask us on Twitter (@FreemadicLife) or on Facebook.

Join the digital nomad revolution. Our mission is to inspire and help you to live, work and play in the most beautiful cities on earth, while building a thriving online businesses. Join our VIP list to be the first to see our latest content.